Why? Because we CAN!
Posted by Woody (Tokin Librul/Rogue Scholar/ Helluvafella!) at 5:04 PM No comments:

The FIRST Mistake Is Believing The Media Have A "Choice" 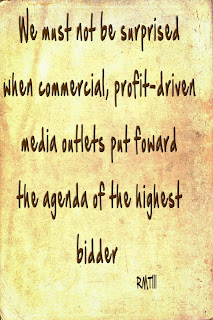 This is naive twaddle.

Some folks apparently believe that USer's media have some modicum of CHOICE or autonomy?

Aren't you cute? Does your mommy know you're out this late?

FACTS: The "media" is a wholly-owned subsidiary of 6 mega-corpoRats. It's not "selling us out." It's just binness...they do what they are told. That's their job.

And everybody who's anybody has known it, for over 100 years. Listen. These are the words which outline, in prospect, what became the common-sense among the "Serious" people of that age:


"If we understand the mechanisms and motives of the group mind, it is now possible to control and regiment the masses according to our will without their knowing it… In almost every act of our daily lives, whether in the sphere of politics or business, in our social conduct or our ethical thinking, we are dominated by the relatively small number of persons … who understand the mental processes and social patterns of the masses. It is they who pull the wires which control the public mind.”


“The conscious and intelligent manipulation of the organized habits and opinions of the masses is an important element in democratic society. Those who manipulate this unseen mechanism of society constitute an invisible government which is the true ruling power of our country.”

“We are governed, our minds are molded, our tastes formed, our ideas suggested, largely by men we have never heard of. This is a logical result of the way in which our democratic society is organized.”

“The American motion picture is the greatest unconscious carrier of propaganda in the world today. It is a great distributor for ideas and opinions.”

“Propaganda will never die out. Intelligent men must realize that propaganda is the modern instrument by which they can fight for productive ends and help to bring order out of chaos.”

“It is not necessary for the politician to be the slave of the public’s group prejudices, if he can learn how to mold the mind of the voters in conformity with his own ideas of public welfare and public service. The important thing for the statesman of our age is not so much to know how to please the public, but to know how to sway the public.”


The author of those painfully forthright sentiments: Edward Bernays--Freud's favorite nephew, the "father" of Public Relations, and a vital, central member of Woodrow Wilson's war-promoting brain-trust, in the teens and 20s of the last Century:

The media consolidation blitz of the 80s and 90s ensured their complete and irreversible completion of the propaganda project. By mid-century, the noted French sociologist Jacques Ellul would declare that propaganda was the ONLY way that the Modern State could communicate with its citizens. It was less useful against external opponents than against their OWN citizens. It must ALWAYS "spin" information, purpose it, direct it toward the State's ends.

And so, as ANYONE with the perspicacity of a mud-bug should be able to attest, it has turned out.

Marxism for People Who THINK They Understand Marxism, By Prof. Richard Wolff

Professor Wolff discusses that which the crisis has made possible in relation to Marxism during this lecture given at The Brecht Forum on July 29, 2012 as part of their Annual Intensive Introduction to Marxism.

Posted by Woody (Tokin Librul/Rogue Scholar/ Helluvafella!) at 6:24 AM No comments:

Melissa Harris-Perry gets all right up in the GRILL of this conservatard beyotch!
The comments are beyond stomach-turning.


I thought Tom Brokaw was his usual, in-fucking-SUFFERABLE, self-serving, ass-licking, self-approving, self-excusing DICKish self on TDSWJS, last night;  a part which he played so successfully all those years when he played a "newsman" on television. He was quick with a quip about the Dims and GOPhux, but when the subject turned to the CorpoRat/SCUM/MSM "press," he was almost tongue-tied in his eagerness to excuse them and himself.

Stewart--whose gig is MEDIA criticism, not simply politics--pressed Brokaw (who should return 1/26th to his life-long salary for NEVER having been able to pronounce the letter "L") on the MEDIA--the MAINSTREAM MEDIA, of which Brokaw is now one of the living "legends"-- on their "performance" in NOT holding the GOPhux speakers in Tampa to any kind of, you know, umm, standards of actual, fucking "TRUTH," and Brokaw almost swallowed his tongue in evasions and temporizing bullshit! What a fucking, truckling WEAKLING the man is.

The first two segments have some funny lines, though...link to them here: http://www.thedailyshow.com/full-episodes/tue-september-4-2012-tom-brokaw?xrs=synd_facebook

Posted by Woody (Tokin Librul/Rogue Scholar/ Helluvafella!) at 7:26 AM No comments: