The "Yes Men" are the utter BAWMB!
RT, we shouldn't forget, is an instrument (tool) of the Russian State propaganda machine, the same guys who do/did Pravda, Isvestia, and Trud in the bad old days...
The Yes Men won't show up on your CorporRat/SCUM/MSM "press."

Posted by Woody (Tokin Librul/Rogue Scholar/ Helluvafella!) at 10:41 AM No comments: 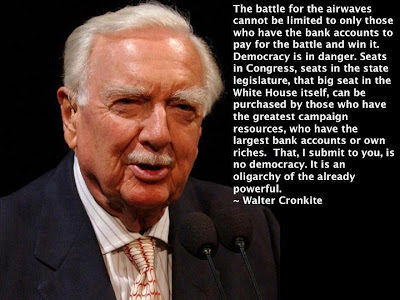 What Cronkite had was the respect of his audience. He was the real deal. He'd stood under German bombs, asnd kept his voice steady, and reported. According to his Wiki bio, Cronkite was one of eight journalists selected by the United States Army Air Forces to fly bombing raids over Germany in a B-17 Flying Fortress part of group called the Writing 69th,[18] and during a mission fired a machine gun at a German fighter.[19] He also landed in a glider with the 101st Airborne in Operation Market-Garden and covered the Battle of the Bulge. After the war, he covered the Nuremberg trials[20] and served as the United Press main reporter in Moscow from 1946 to 1948.[21]
A dinosaur.
Everybody knew it even at the time. He was the last of his kind. About him LBJ lamented, when he lost Cronkite in '68, he lost the country on the War.
Via the expedient of "media consolidation" (a polite term for seizing the media--which is what guerrillas ALWAYS do when the Coup is in process), the oligarchs, owners, and Oners have seen to it that we'll NEVER see his like again.

Remember when we could trust a journalist? If you ever could, it died with Cronkite...


Posted by Woody (Tokin Librul/Rogue Scholar/ Helluvafella!) at 11:28 AM 2 comments: