Obama's Choice To Head The Auto Re-Organization: Is He A Fucking Scab Union Buster? 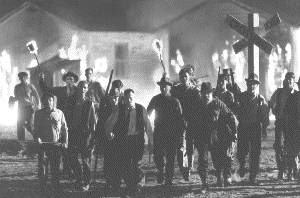 Steven "Steve" Lawrence Rattner is an American financier and private equity investor. He is one of the four founding partners of the private investment firm Quadrangle Group, which invests media and communications companies globally. On February 23, 2009, the Wall Street Journal announced that Rattner would be named to the Treasury Department as auto industry adviser The New York Times reported that he would be lead advisor and leader of the industry group for Treasury Secretary Timothy Geithner.[1]

A graduate of Brown University, Rattner started his career as a reporter with The New York Times, first at the Washington bureau, where he became close friends with Times' ownership-family member Arthur Sulzberger, who also was at the time working as a reporter; and then at the London bureau. Subsequently, Rattner quit journalism and joined Morgan Stanley, where he founded their Communications Group. In 1989 he joined Lazard as a General Partner; he founded their Media and Communications Group. In 1997 he became Lazard's deputy chairman and Deputy CEO, a new position. He stepped down from those positions in 1999, and left Lazard in 2000, with three other partners in that firm, to found the Quadrangle Group.

In January 2008 it was reported that, through his friendship with Rattner, New York City Mayor Michael Bloomberg's extensive business interests were placed in "a sort of blind trust" because of Bloomberg's possible run for the presidency. Bloomberg would "continue to have control of and access to certain investment decisions."[2] Quadrangle will continue with its responsibilities for Bloomberg after Rattner's departure for the Treasury position. Bloomberg also strongly endorsed Rattner's Treasury appointment.[1]

In April 2009 reports surfaced that he had directed his firm to pay $1 million to New York state officials to obtain control of $100 million of the state's pension fund.[3]

You'll have noticed that the description is pretty bland? Nothing in it to justify the extreme expostulation of the hed on this piece, certainly. Just the spoor of the average, aspirant sycophant's nose up the ass of the "connected" to that nirvana of wealth and power: Acquiring the taste for gilded shit. Nobody every amounted to anything who couldn't or wouldn't tongue-lave the prostates of the powerful on demand. Nothing unusual there, right? It's the American Way. 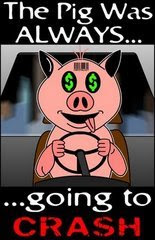 But then you read the piece on Wednesday by John MacArthur, Harper's Magazine publisher, and the quite understandable distaste the biography engenders becomes the stuff of my headline:

Barack Obama's commitment to helping labor has always been suspect, but handing over the American car business to the investment banker Steven Rattner might well turn the president into the last great union buster.

To be sure, we're already long past the point where industrial unions have any real clout in our so-called service economy - this thanks to "free trade" (that is, guaranteed cheap labor in foreign locales and low import tariffs on foreign-made goods) and Bill Clinton's alliance with the Democratic Leadership Council (DLC). Franklin Roosevelt's old party of labor is now almost entirely the party of Wall Street and only a severe depression might alter this political reality. When Obama sent economist Austen Goolsbee to reassure the Canadian government that the candidate's criticism of the North American Free Trade Agreement during the Ohio primary didn't mean anything, he meant it.

But this isn't to say there aren't a few remaining pockets of working-class resistance to the money power that Wall Street and the DLC would like to crush. And right now, Rattner and the Treasury Department task force's biggest target is not the overpaid executive staff at General Motors, but the United Auto Workers union, the country's best and traditionally most honest mass labor organization.

After a short summary of the rise and fall of the USer Union movement, MacArthur returns to is main point (I bold-faced one of the "money" quotes):

...Right-wingers still whine about "big labor's" supposedly disproportionate influence, but campaign contributions tell a different story: The finance, insurance and real-estate sector (FIRE) gave Obama just over $38 million in this last campaign, while labor gave a paltry $466,324, according to the research group Open Secrets. Granted, UAW political-action committees donated $2.32 million to various Democratic candidates in the latest election cycle (according to the FEC), but this is loose change in the world of Steven Rattner and his wife, Maureen White, a former banker and one-time national finance chairwoman of the Democratic Party. Combined, the bundled contributions of Goldman Sachs, Citigroup and J.P. MorganChase just to the Obama campaign amounted to $2.28 million.

Let's pause for just a brief moment to consider this paragraph. "FIRE gave Obama just over $38 million in this last campaign, while labor gave a paltry $466,324..." Savor that flavor? Yep. Corruption. No, no not the FIRE bribery. It's the Unions. Really! 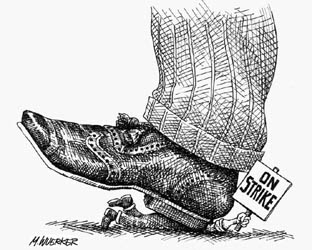 Nevertheless, we will hear no end of the overpaid and gluttonous autoworkers who dared to demand health insurance, pensions and good wages. Isn't it outrageous that a GM production worker can make $28 an hour, including benefits, and that he or she can retire in some comfort after decades on the assembly line? Isn't it terrible that GM is contractually obliged to take care of its workers? God forbid we protect Americans by raising the 2.5 percent tariff on imported cars to compensate for indirect Japanese export subsidies.

But the UAW's critics needn't worry. Whether Obama eases GM into Chapter 11 bankruptcy - that wonderful system of corporate protectionism - no doubt favored by Austen Goolsbee and Lawrence Summers, or whether he forces the UAW to destroy itself with givebacks, we're headed for the end of the line for middle-class unionism.

Bankruptcy would make it easier to break union contracts, but the UAW, relentlessly attacked for being too successful for its members and so far unable to organize Japanese car plants in the United States, will probably cave in for PR reasons before it comes to Chapter 11. If that happens, it won't be a union anymore.

Meanwhile, autoworkers (and automakers) in Japan will continue to benefit from government-funded national health insurance unavailable to American employees of non-union Japanese plants in the U.S. And Steven Rattner can go on throwing benefits for Democrats at his home on Fifth Avenue.

Anyone with the cognitive acuity of a sand-dollar has known from the very outset of this crisis that the "bidness interests"--that is, the corporate wing of the State--would use the "shock" of the financial crash as the opportunity--if indeed, it was not the express purpose--to seriously wound if they couldn't kill the last vestiges of union protection for workers which still survive after 30 (well, 28) years of Reaganism. It was and is transparent.

It took GOPuke Nixon to go to China (though it was Carter who opened relations). It needs a Dim (Obama) to kill the Unions, all the better if it's a woman or a minority. This, in fact, might just be the exact purpose for which the Owners chose Obama to be President...

This is real fucking special Woody.
If this plays out as it seems it may our Prez will be damn near as bad as the last one.

Great photo, which I'm about to snag.

Thanks for the insigns. I will try to follow your tips.