Doncha Wonder Why The Guardian (e.g.) Published This, Not The NYT? 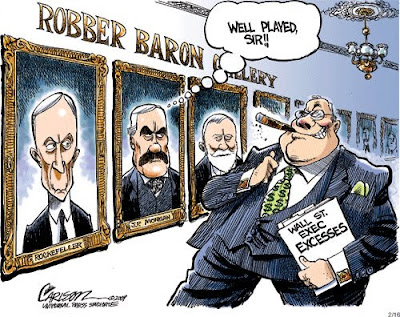 Via InformationClearhinghouse, from The Guardian, Dean Baker explains it all for us:

The elites hate to acknowledge it, but when large numbers of ordinary people are moved to action, it changes the narrow political world where the elites call the shots. Inside accounts reveal the extent to which Lyndon Johnson and Richard Nixon's conduct of the Vietnam war was constrained by the huge anti-war movement. It was the civil rights movement, not compelling arguments, that convinced members of the US Congress to end legal racial discrimination. More recently, the town hall meetings dominated by people opposed to healthcare reform have been a serious roadblock for those pushing reform.

Those disgusted by the bank bailouts, and the bankers who brought us this recession, will have a chance to make their views known when the American Bankers Association has its annual meeting in Chicago this month. A large coalition of labour, community and consumer organisations are organising a protest at this "Showdown in Chicago". (Please go to Chicago. W)

A big turnout at this event can make a real difference. Just to review the scorecard, most of the country is still suffering the fallout from the bankers' irrational exuberance of the housing bubble era. The Congressional Budget Office (CBO) and other forecasters expect the suffering to endure for years to come.

The ("Official"--W.)US unemployment rate is about to cross 10%, with an additional 9 million workers only able to find part-time work. CBO projects that unemployment will not return to normal levels until 2014. Almost 200,000 people are losing their homes every month through foreclosure. Tens of millions of people who had expected a comfortable retirement just saw most of their wealth disappear with the collapse of the housing bubble. State and local governments are being forced to lay off school teachers and fire fighters under the pressure of enormous budget deficits.

But not everyone is suffering. Thanks to the bailout programmes put in place last fall, most of the country's major banks are back on their feet. In fact, in the most recent quarter, bank profits hit a new record high as a share of all corporate profits.

And the banks are sharing their wealth. Many of their top executives and high performers will be getting bonuses this year worth millions of dollars. In some cases the bonuses will be in the tens of millions.

In the meantime, in elite Washington circles people are busy making plans for a national sales tax so that the government can limit the fiscal damage caused by the bankers' recession. A sales tax is of course very regressive, since low- and moderate-income people typically spend the vast majority of their income, while our banker friends will more likely to be able to save some of their income or spend it in other countries where they will not be paying this new sales tax.

To summarise: the bankers wrecked the economy with their greed, ran off with taxpayer dollars in a massive bailout and now plan to raise taxes for the rest of us. If that picture doesn't sound quite right, then go to Chicago.

This is a case where the divisions are not left-right, but of the elite against everyone else. When Congress was debating the Tarp bank bailout last fall, members of Congress were hearing calls from people across the political spectrum who were outraged that their tax dollars were going to the banks that had wrecked the economy. A higher percentage of Republicans than Democrats ended up voting against this bankers' piñata.

The policies that will rein in the banks: reform of the Federal Reserve Board to make it democratically accountable, a tax on financial speculation to pay for the bankers' mess and restrictions on the bank abuses of consumers that caused the carnage have support from people on both the left and right.(N.B.: These policies are all explicitly opposed by both Geithner and "thePrez." W)

A bill that would require the Fed to disclose what it did with more than $2tn (TRILLION! W) in loans to banks and other financial institutions was originally co-sponsored by Ron Paul and Alan Grayson, one of the most conservative and one of the most progressive members of Congress. Due to public pressure, it now has more than 270 co-sponsors.

This is exactly the sort of alliance that gets the elite worried. Reining in the power of the financial industry will be a long, hard-fought war, but it is one that must be fought. President and Nobel peace prize winner Barack Obama may not have been able to bring the Olympics to Chicago, but everyone who wants to retake our country from the banks can bring their backside there on 25 October.

Are you seriously thinking about going to Chicago??

i won't fly anymore. I ALWAYS get hassled. Not worth it for the pleasure of the goons of TSA...

Hello. Even though banks are on their feet again I wouldn't be very optimistic. The housing "bubbles" ruined seriously the economy and I am afraid that there are another ones to be expected. The whole country is in debt, but people continue taking more and more loans. This isn't certainly the right way to get out of the financial crisis.
Take care,
Julie

ReT: What EVER gave you the impression that I harbored even the tiniest scintilla of optimism?