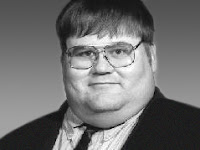 From Klaudt’s voting history, to reaction from his former constituents and the state, our news crews are working to cover all angles of this developing story.

There is a .pdf file which graphically details the explicit crimes of which Klaudt is accused.

I reckon he 'turned himself in,' alrightee. Where was he gonna hide that shape? And there was NO FUUKIN WAY he could get far fleeing on foot. The story doesn't report whether he's (was) married or not. Whaddaya think*?

(*he IS, with one child)
Posted by Woody (Tokin Librul/Rogue Scholar/ Helluvafella!) at 1:55 PM

"Do as I say, not as I do!" This sentence was found in religious gospel of The Book of Republicans. It's right before the chapter on how to get rich and stick it to the people.

According to the keloland boards he is married and his wife is a well-respected teacher at the local schools.

God only knows how long/short that marriage will survive this case.